On Friday morning, the four of us woke up at varying times but all before 4:40 am, which was when we left our house and cat for the airport. Ethan drove us. 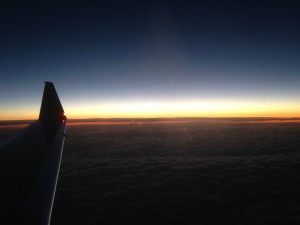 Our first flight was from Eugene to San Francisco. In San Francisco, we went to the United lounge for a few minutes, where I had a banana, a boiled egg with capers, and yogurt with granola and strawberries. (I’m a fast eater.) Soon, we were flying across the United States with lots to do (watch The Martian and do homework) only a Stroopwaffel to eat. (Those are United’s new morning domestic flight snacks. According to Mom, they are gross. I did not eat one.) We finally touched down in Newark at around 6 pm local time. Then came a long and daunting journey: the search for supper.

We hauled our four suitcases and four backpacks through the terminal, looking for the Ben & Jerry’s, the old food court, less expensive macarons–anything, really. In the end, we went to the United lounge for salad, hummus with pita and vegetables, and chocolate-covered graham crackers. For dessert, Mom, Ethan, and I got frozen yogurt from the Red Mango kiosk right by our gate. Immediately after Mom and I finished our yogurt, we boarded the six-hour flight from Newark to Lisbon. The captain left the seatbelt sign on the whole flight, the sunrise was unimpressive (even though it was our second in 18 hours), and breakfast was a hard croissant with jam. 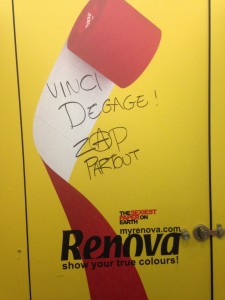 The sexiest paper on Earth, in the bathroom at the Lisbon airport

Within two hours of landing in Lisbon, we were in our rental car with working mobile phones, maps, and an idea of where to spend our morning and afternoon (we landed around 7 am local time). An hour later, we had gone eight kilometers and finally found a parking spot, after almost colliding with trolleys, parking in a no-parking zone, and struggling with understanding Portuguese. We left our car and walked by a church with a view on our way to Castelo de S. Jorge Monumento Nacional. 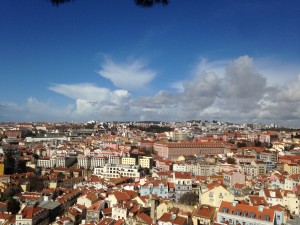 Unlike most European castles, this one was not created as a residence. It was built to house military troops in the 11th century. However, it eventually became a residence for the local royals, then became military barracks again in the 1800s. Finally, last century, the castle became a national monument. Now, hundreds of tourists visit the castle daily, and peacocks and pigeons terrify those who choose to eat at the outdoor café. It was at that café that I discovered pink Magnums (reminiscent of our time in Thailand), which would play a role later in the day. 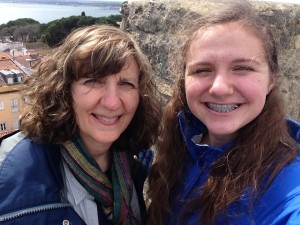 Mom and me at the castle

After the castle, we went to lunch at a distinctly touristy location. Dad and Ethan shared vegetable spaghetti and a cheese, tomato, and lettuce baguette. Mom and I shared a vegetable salad and cod. Though cod is considered one of Lisbon’s most traditional dishes (especially bacalhau, or salted cod), I did not enjoy the fish. Neither did Mom. But we ate most of it anyway before heading to the Olive Tree House at 3 pm. Mom and Dad went grocery shopping after we had been checked in, while Ethan and I showered. The parents came back with pizza, ice cream (pink and black Magnums!!), shampoo, bread, and chocolate bars–a healthy diet, yes? 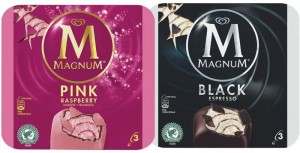