There is now another broken wrist in the family.

Today, almost three years after Mom broke her arm while hiking down from Refugio Piltriquitron in El Bolson, Argentina, we hiked up to Scout Lookout at Zion National Park in Utah. We arrived here yesterday after a long, icy drive through Oregon, Nevada, and Utah (fortunately, neither Dad nor I crashed the car, despite below-zero temperatures and 80 mph speed limits). This morning, after a high-calorie breakfast, I drove us into the park. 28 degrees Fahrenheit never seemed so warm.

We paid a visit to the visitors’ center-turned-shop before heading to the Court of Patriarchs. There, Ethan and I discovered the ease of letting ourselves slide down the icy hills while hanging onto the handrails. Mom did not enjoy this as much as we did.

We finalllllly found a parking spot at Zion Lodge. It was only a half-mile walk from the Grotto Trailhead, where we started hiking. Ethan had decided not to bring a backpack so I was stuck carrying his water bottle and his hat and gloves as he shed them.

Ethan and I were far ahead of the parents, but we stopped occasionally to let them catch up. The exposed switchbacks up the first mile or so were the hardest. After we entered a shady canyon, the going was easy until we reached eight switchbacks. At the top of those, we reached the infamous Walter’s Wiggles. Apparently these are really difficult, but they seemed very easy, not steep, and short. However, they were also very icy and snowy and we had to go slowly. 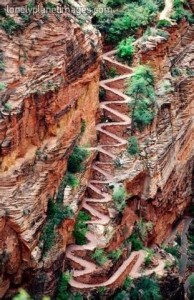 Along the way, Ethan and I befriended siblings Ethan and Porsche. Ethan II advised Ethan I on ice hiking technique and the physics of friction. At the top of the Wiggles, we stopped at Scout Lookout while everyone else on the trail continued to Angel’s Landing. Because we didn’t have crampons or any other sort of shoe gear, we played it safe and did not go on.

Ethan and Eryn at Scout Lookout

Ethan and I started down the canyon ahead of Mom and Dad. To take on icy Walter’s Wiggles, we slid down on our feet with our hands behind us, in the form of a crab. This worked well, but Ethan abandoned this approach when some grown men were coming down behind us. In his pride, he continued on down a switchback and out of my sight. Then the two men behind me, who were going much faster than me, exclaimed, “Are you all right?? What happened?”

That was when I saw Ethan, who was grimacing and clutching his left wrist. After assuring him that nothing was broken based on his mobility, the men continued on. And so did we.

We carefully picked our way down to Zion Lodge. We peeked in there and then returned to our hotel, where Mom and Dad set about trying to find a clinic that worked with our insurance. Mom and Ethan finally left for a clinic 40 minutes away. There, they determined that his radius was in fact fractured all the way through, though they only had to put him in a brace because the bone is still aligned.

The worst part about all this is that Ethan will still be able to take notes in AP government as he is right-handed (though he won’t be able to play the piano, saxophone, or guitar).